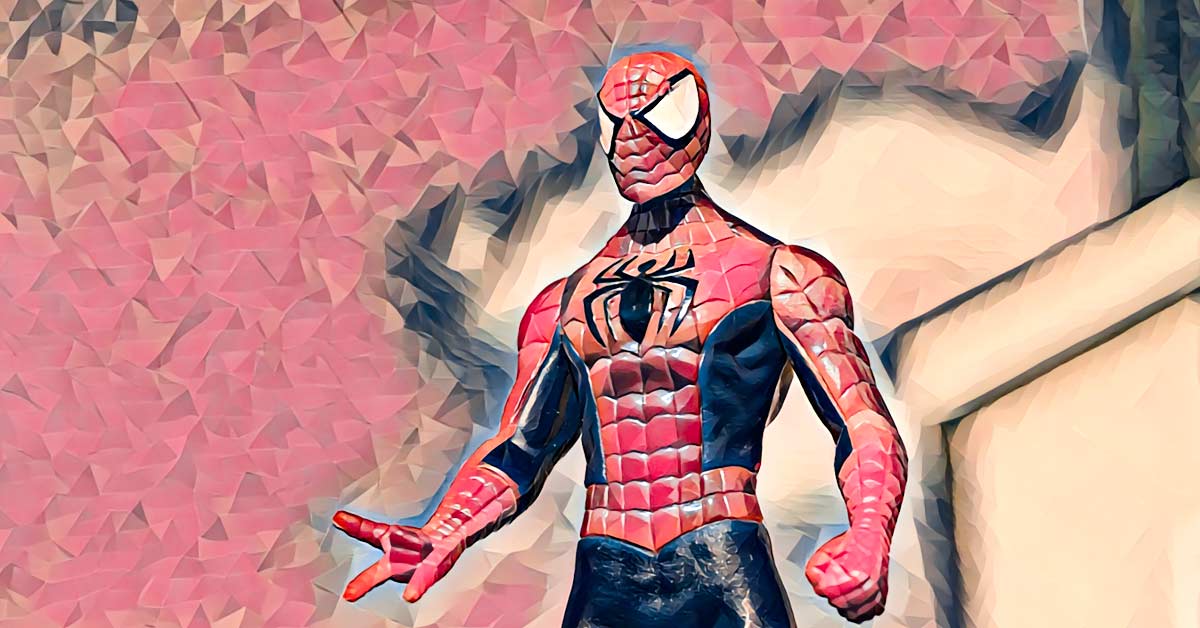 Summon your friendly neighborhood Spider-Man through these Spider-Man Perler beads below!

Spider-Man remains one of the most recognizable and iconic superhero characters around the world among both teens and adults.

Look no further than the overwhelming success of the most recent installment from Sony and Marvel Studios, Spider-Man: No Way Home, which was the highest-grossing film of 2021.

If you still can’t get over the ending of the movie, or you’re just a super loyal Spider-Man fan, I’ve compiled different Spider-Man Perler bead designs and patterns so you can always keep Spidey close to your heart.

Here are a few superhero kits that will take beginners closer to their endgame of becoming an Avenger!

Who doesn’t love superheroes? Make them come to life through these superhero crafts! 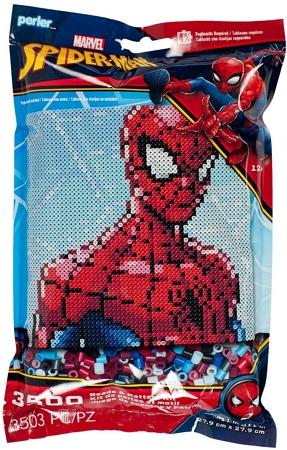 Looking to construct a Spider-Man Perler bead to display?

With this Spider-Man Perler bead kit, you won’t need anything else, as it contains enough beads to create an awesome pattern, a pair of tweezers, and a pattern sheet with instructions that even children can easily follow. 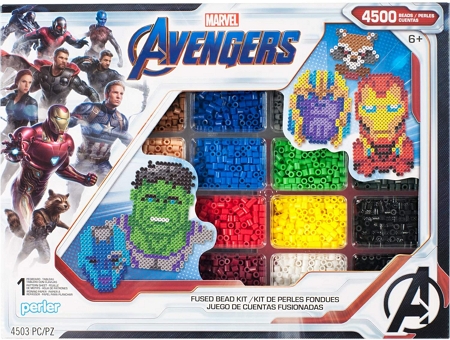 Spider-Man is, of course, part of the team of Earth’s Mightiest Heroes.

Our friendly neighborhood Spider-Man can easily handle threats in New York City, but when there’s a global threat involved, he must call upon the Avengers.

Fans of this superhero team shouldn’t miss the opportunity to make their favorite characters, and the easiest way to do so is by getting this Avengers mega Perler bead kit, which contains over 4,000 beads, a pegboard, an ironing paper, and a pattern sheet of the characters. 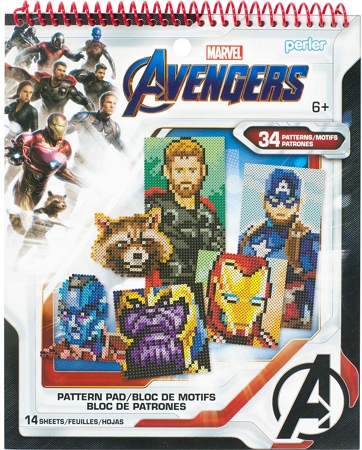 If you’re fully stocked with fuse beads and just need the inspiration to transform those individual beads into a wonderful art, then this Avengers Perler bead pattern pad is a perfect choice.

Alternatively, these Marvel Perler bead will set you in the right direction to defeat those Avengers-level threats.

Here are twelve classic Spider-Man designs that every fan is familiar with. These Spider-Man patterns start out easy and get progressively more difficult..

The most recent installment has undoubtedly created new followers and fans for our favorite webhead, be it kids or adults.

Here’s a Spider-Man fuse bead pattern from GalaxyCraft_MC for those little ones who aspire to be like the web-crawler.

Here’s another amazing Spider-Man Perler bead pattern that can be done in less than an hour, courtesy of Pixel Real.

The head of this design is reminiscent of those kawaii characters that have exaggerated body proportions.

If you’d like to see what I mean by kawaii characters, then don’t hesitate to head on our list of Kawaii Perler bead patterns.

Spider-Man can do all sorts of amazing things that a spider can do.

One of them is demonstrated by gardeniafly, who created a pattern of Spidey being able to keep his body upside down without being dizzy.

“With great power comes great responsibility”, is a mantra that Peter keeps close to his heart.

That’s why he’s a superhero and not a supervillain because he uses his powers to fight evil and protect the citizens of New York.

Here’s a pattern by Arcanjulio showing us Spidey swinging through the neighborhood.

These PAW Patrol crafts are other responsible characters that provide services to the citizens.

For a more complicated design, PinkLady shares with us a detailed swinging Spider-Man Perler bead pattern.

Speaking of complicated stuff, here are some paper mache pumpkins if you’re looking for some cool decor and are up to the challenge!

Just like Peter Parker who provides different photos of himself to the Daily Bugle, TurtleDurdle supplies us with a swinging Spider-Man pattern but from a different angle.

Fans love to keep a portrait of their favorite idol in their bedroom or their workplace.

I absolutely love the look of this super simple Spider-Man face pattern, brought to you by Momes.

For older children who find the previous face pattern too minimalistic, don’t worry, because cjjones is here for a more complex Spider-Man face pattern that they can proudly display.

This one can easily be made bigger to serve as a mask for children.

Encourage imaginative play of children with these paper bag puppets!

13. How To Create Spider-Man’s Face

Here’s for the Spidey fans who would enjoy a big project for the weekend. Tannah’s channel shares a video tutorial of a big, round Spider-Man design that requires square interlocking pegboards to complete. Simply pause the video if you find the pacing too fast.

When we see such a pattern, like this one provided by Free Beads Patterns, there’s no doubt which superhero it’s referring to.

Those fascinated with spiders should try their hand with this Spider-Man logo pattern.

Don’t forget to check out our Halloween painted rocks, where spiders and other spooky creatures are waiting for children to paint them.

When you find that 2D Perler bead patterns are too easy to make, you must look for other intriguing projects, like a 3D version of it. Thankfully, Wolleplanet’s channel released a video tutorial on how to make a 3D Spider-Man.

Don’t forget to prepare a glue gun or super glue for this project.

3D Perler beads can be quite a fun activity for the entire family! Here are some of the coolest 3D Perler bead patterns I’ve found.

8 Spider-Men from Other Universes

The Marvel Cinematic Universe is slowly acknowledging the existence of other universes. There’s no doubt that we’ll see these popular Spider-Men (and Women) from other universes on the big screen sooner or later.

I hope you’re enjoying these patterns so far. If you’d like to see more of Spider-Man, look no further than these Spider-Man crafts!

One of the most popular Spider-Man from another universe is Miles Morales, who was the main protagonist in the 2018 film Spider-Man: Into the Spider-Verse.

Flood7585 provides us with a cool-looking Miles Morales design.

Personally, I love the black and red aesthetics of this version of Spider-Man, and would proudly display such a pattern.

There’s no shame in starting with the basics, like this Spider-Man Miles Morales face shared by Brik.

If your children haven’t watched Spider-Man: Into the Spider-Verse yet, then this pattern by e-g-g-s is a great gateway to introduce the film to them.

Spider-Man and Spider-Gwen are both memorable characters and play a huge supporting roles for the protagonist in the film.

Just like the patterns above, these Star Wars crafts and Star Wars Perler beads are amazing ways to introduce the Star Wars franchise to the younger generation.

This pattern from tashar_h helps us in being hopeful that a crossover may happen someday, however unlikely that might be.

In the meantime, fans of Mario shouldn’t miss out on these Mario Perler bead patterns.

Peter Porker, or Spider-Ham, is an actual character from the Marvel comics who was also featured in the 2018 film. 8-BitHero kindly shares a pattern of this silly superhero that children will enjoy making.

Pigs are fascinating creatures. Learn more from this list of pig Perler beads and guide on how to draw a pig.

Even though this version of Hello Kitty gets the webhead’s eyes, which are shaped almost in a menacing way, it only makes it even more adorable.

You have Kya917 to thank for this endearing Spider-Man-inspired Hello Kitty.

Are you a fan of just cats? No problem, here are cat Perler beads just for you!

If you’re tired of seeing the same Peter Parker costume over and over, here’s geek-2perlerbeads recreating alternate versions of Spider-Man over the years, such as the Iron Spider, Spider-Man 2099, and many more!

While it may look complicated since it’s 3D, don’t be too intimidated as the guide will walk you through each step.

Do you want some privacy when you’re busy playing video games in your room? Then this Spider-Man door hanger from SarahLinShop’s channel is the perfect video tutorial for you.

Since they use two connected pegboards, the design will fit the typical doorknob.

26. Spider-Man Hanging on a Switch

To add some flair to your display room, ideecreatiti creates this hanging Spider-Man for your light switch. It’s best to first check your light switch measurement before following the guide. Once you’ve nailed its width and length, then proceed by making the inspiring web design.

These last five designs will give Perler bead enthusiasts and Spider-Man fans a sense of achievement and a project that they can proudly display.

You don’t need to see the whole picture (literally!) to know that this design by Tjalle is the friendly neighborhood Spider-Man.

True fans will point to the comic book Amazing Fantasy #15 as the origin story of Spider-Man.

If you’re one of those passionate comic book readers, this cover recreated by Pixel Art Shop is a must-do!

Many consider the Sam Raimi Spider-Man films as the franchise that defined the future superhero films.

The younger generation of Spider-Man fans might’ve not seen the original Spider-Man films but I’m sure that they haven’t missed Tom Holland’s amazing portrayal of the webhead.

Here’s laurenbrue‘s Perler bead pattern, which is inspired by the costume from Spider-Man: Far from Home movie.

When you’ve been granted so much power, it’s your responsibility to use that power for the best.

Similarly, when you’ve been given a supply of Perler beads and patterns, you simply cannot ignore the opportunity to create these Spider-Man designs.

Create more Perler beads through these other lists: