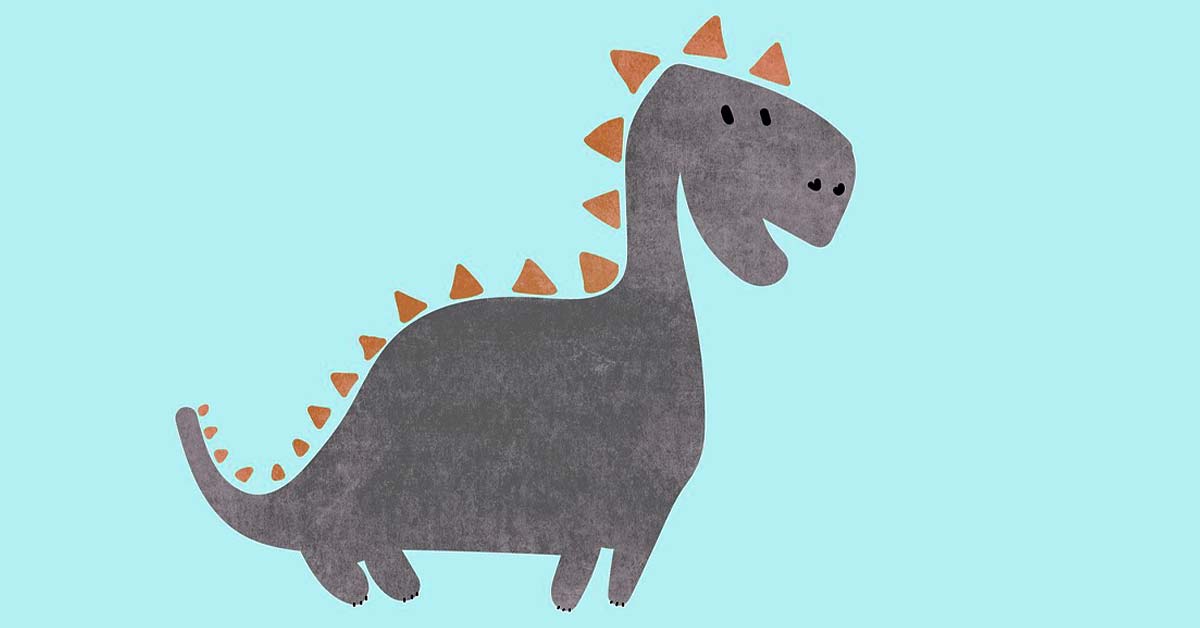 You don’t have to dig up fossils to imagine life on Earth millions of years ago, especially when you draw these simple dinosaur drawings. While only fossil records exist of these animals, the images of these walking giants are fresh and exciting.

I’ve compiled some of the simplest and most popular dinosaur drawings!

Dinosaurs are probably not as scary as we thought. We’re used to seeing dinosaurs with pointy, protruding fangs. Here are some drawings that will appeal more to toddlers and preschoolers.

1. How to Draw a Dino With Shapes

Practice the basics of shapes with this dinosaur drawing by Art for Kids Hub.

Preschoolers are just starting to develop their visual skills and fine motor skills, so a bare dinosaur heavy on shapes is more appropriate for their skill level.

Not all dinosaurs are ruthless carnivores: in fact, because of the lush vegetation that covered most of the Earth’s surface, many of them enjoy eating only plants.

That’s one of the many reasons children shouldn’t fear dinosaurs—apart from being extinct. ResiMania ART’s channel shares a friendly dinosaur drawing.

Draw With Pappu has shared a cute chibi dinosaur—another drawing to convince terrified children of their wholesome nature.

Chibi is a term referring to characters or animals (or even objects) designed in an absurd but cute way, with their head and eyes drawn larger than their body.

It’s not scientifically accurate, but I consider it successful if it encourages kids to do these activities.

Just like with everything in life, it’s easier if you take it step-by-step.

That’s what Class Playground promotes in these five minimalistic drawings—which begin with drawing the outline and branching out the details from that outline to create the final form of the dinosaur.

Tyrannosaurus rex—the name itself, which means “King of the Tyrant Lizards,” brings chills down the spine.

All things considered, though, there’s little to be terrified about this extinct apex predator. Just look at these cute t-rex drawings.

As Toy Story‘s Rex has shown us, not all tyrannosaurus rex are ferocious. That’s also the case with this nine-step drawing by Hello Artsy, who depicts a kind and gentle, yellow t-rex.

Can you outrun a t-rex? Though they can’t run, these giants can still walk at the speed of 15 miles per hour—faster than most humans can run.

So, no, you probably can’t escape these beasts. But who would want to run away from a t-rex as adorable as Draw So Cute has designed it?

7. How to Draw a Detailed T-Rex

If your little ones have overcome their fear of t-rexes, then they’re ready to move on to a more complicated drawing, prepared by UCIDraw’s channel.

Let’s move on to a less aggressive type of dinosaur, one that’s beloved by many: the triceratops.

These gentle creatures are what you get if you mix a rhinoceros and a parrot, though they aren’t related to either of these contemporary animals.

It’s heartwarming to see your little ones draw the babies of other animals. Drawing Howtos provides a baby triceratops drawing.

The frills of the triceratops are its most distinctive aspect—for me at least.

This herbivore has other characteristics that might appeal to children—like its horns, or its parrot-like beak, both of which are depicted cutely in this drawing shared by KidArtX – Cute Simple Art’s channel.

Do you want a more realistic variant of the triceratops drawing? Kids Draw TV has got a special video tutorial for those interested.

Pterodactyls might seem scary; after all, flying carnivorous dinosaurs are nothing to scoff at. Again, here are three drawings that will persuade children otherwise.

These hummingbird drawings might be more appealing than these prehistoric reptiles.

Cartoon versions of animals are more relatable for children as they’re familiar with these characters shown on TV.

Here’s a friendly pterodactyl from Cartoon Quick Draw that requires no persuasion to draw.

12. How to Draw a Kawaii Pterodactyl

They colored their pterodactyl yellow, but encourage your little ones to express their creativity and choose their favorite color.

As part of your journey to becoming a Pokemon master, it’s integral to study all types of Pokemon—even prehistoric ones like Aerodactyl.

That’s achievable through many ways, including drawing; so, here’s an incredible tutorial shared by Cartooning Club How to Draw’s channel.

The stegosaurus is another popular dinosaur that many are beguiled by. The plates on its back are simply mesmerizing—kind of like these mesmerizing mushrooms Perler beads.

You would think that the bony scales on the stegosaurus’s back are attached to its skeleton, but they’re only skin-deep—unlike the sharp tail spikes.

To prove how friendly this herbivore is, Hello Artsy shares this adorable stegosaurus design.

Though it may feed on plants, the stegosaurus can be fierce when it needs to defend itself from predators. Specifically, some experts believe that it swung its flexible tail as a weapon—kind of like an elastic spiked club.

Watch the stegosaurus as it roars in this drawing shared on Art Land’s channel.

If time is of the essence, these easy and speedy velociraptors are suited for you.

Don’t underestimate this turkey-sized dinosaur: it’s quick and vicious. But you don’t have to worry about getting chased and eaten with How To Draw For Kids‘s design.

17. How to Draw a Velociraptor

Thank goodness for the inaccurate depictions of velociraptors on the big screen. These agile dinosaurs are believed to be covered in feathers, making their image more unsettling than it is.

Even though these dinosaurs are swift, I recommend drawing at a pace you’re comfortable with, pausing on each detail that Cool Kids Art’s video tutorial provides.

The ankylosaurus and stegosaurus are highly similar in physical characteristics. They might even be buddies who spar during their free time.

This dinosaur is a fortress: it has knobs and plates on its skin as armor, plus a heavy tail that sends daring predators into oblivion.

We get a glimpse of how fierce this animal is through We Draw Animals‘s depiction.

19. How to Draw a Cartoon Ankylosaurus

Here’s a cute ankylosaurus with a cute morning star weapon for its tail.

EasyPicturesToDraw almost makes the dinosaur seem like an ancestor of the turtle.

Dinosaurs are fascinating. Whether it’s their staggering size, incredible physical characteristics, or even the fact that these are life forms that thrived for millions of years (before being wiped off by a big rock), one can’t help but be intrigued by them.

I believe these drawings are a great way to get children inspired and interested in learning more and staying curious.

For more, simply check out these other animal drawings: