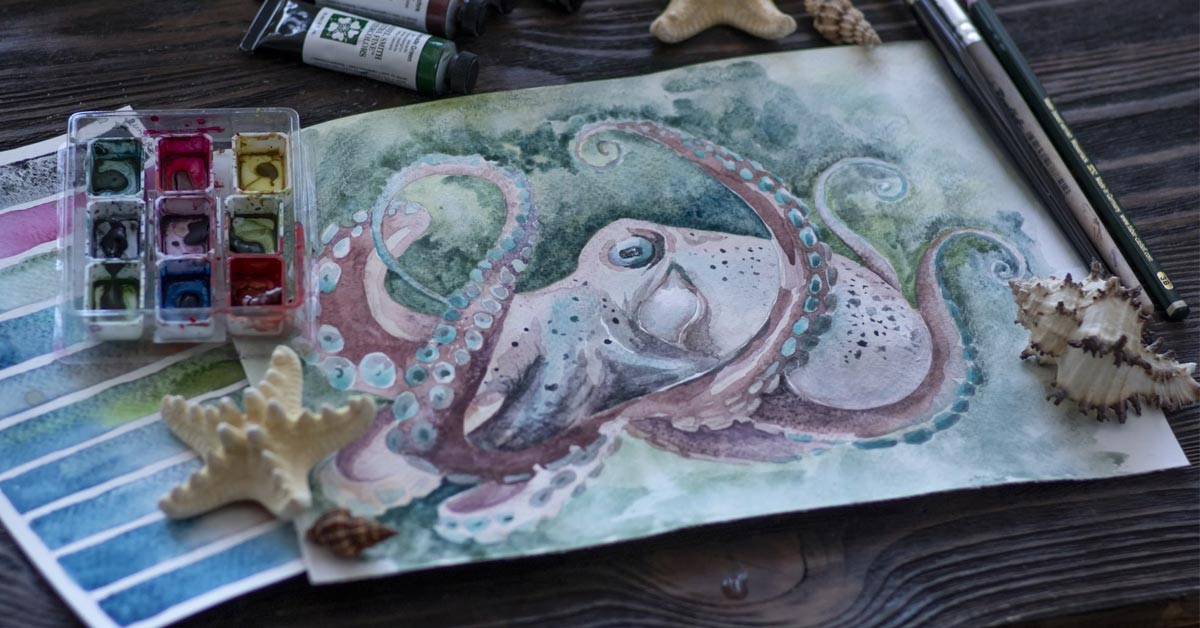 The octopus is one of the marvels of the vast ocean. They can camouflage with their surroundings or grow as big as 30 feet!

We know a lot about these cryptic creatures, yet at the same time, we are just only discovering characteristics that make them unique.

Draw these animals while learning interesting facts about them by following one of these 17 octopus drawings that your children will be fascinated with.

Prepare your materials and encourage your kids to do these simple octopus drawings.

These octopuses (or octopi) are perfect for beginners since some of the drawings start from a letter, and some involve just drawing simple circles and lines.

1. How to Draw an Octopus From Lowercase ‘o’

Are you having a hard time making your kids remember some of their vowels? They’ll no doubt remember the letter ‘o’ after drawing this octopus design from The Dessiner.

Fun Octopus Fact #1: the Octopus gets its name from the Greek term októpus, which means “eight foot.”

If after drawing this you’re still interested in reinforcing the letter O, then check out our compilation of letter O crafts. 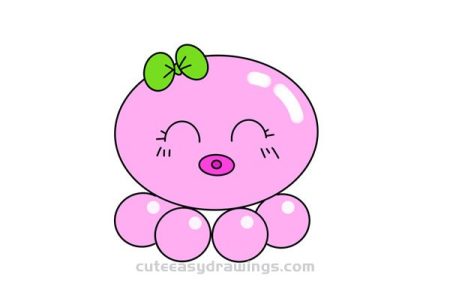 Try to not limit your coloring options to just pink – allow your children to pick a color that they find attractive.

Fun Octopus Fact #2: Pink octopuses do exist in the wild, as well as other common colors such as gray, brown, blue.

3. How to Draw an Octopus and Tentacles 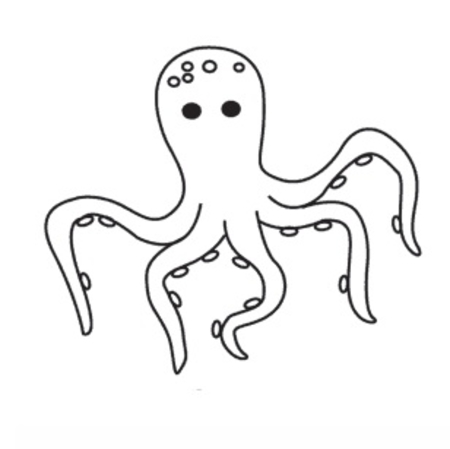 Involve your kids in practicing some difficult (but not really difficult) curvy lines to strengthen the mental connection between their hands and minds.

What better way to do that than drawing the flexible and squiggly arms of the octopus? Check out this drawing from We Draw Animals.

Fun Fact Octopus #3: The octopus is an invertebrate, which means they don’t have a backbone, as opposed to, say, humans which have a vertebral column (the spine).

4. How to Draw an Octopus for Kids: Easy for Young Kids

It’s never too late to start with the basics. After all, this becomes the foundation that’s critical for many aspects of your children’s development.

So show your toddlers this easy octopus drawing and try to have them recreate it and encourage them to learn from their mistakes.

Fun Octopus Fact #4: The correct name for an octopus’s limb is “arm” and not tentacle. The difference lies within the suckers present: it’s a tentacle only when you find them on the end! 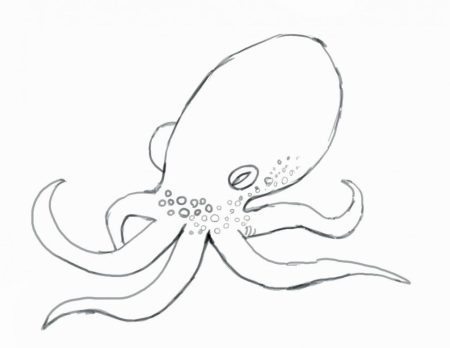 Among the simple designs listed in these first 6 octopus drawings, this portrays the octopus most accurately.

It’s not too complicated for younger kids to follow this design because there are no complex lines or shading involved. Follow this simple octopus design from Coloring Home.

Fun Octopus Fact #5: Did you know octopuses have blue blood?

6. How to Draw an Octopus From the Letter “S”

“S” is for the slimy and sneaky octopus drawing that you’ll create by following this design from Drawing With Steve Harpster.

This is a great drawing and alphabet exercise to train your little ones with.

Fun Octopus Fact #6: Did you know an octopus has three hearts? That’s an impressive feature for any animal!

Continue the letter “S” lesson with these other letter S crafts!

When you think of cute animals, the slimy and enigmatic octopus might be the last thing that pops into your mind.

However, you might change your perspective on that once you see these next 6 cute octopus drawings. 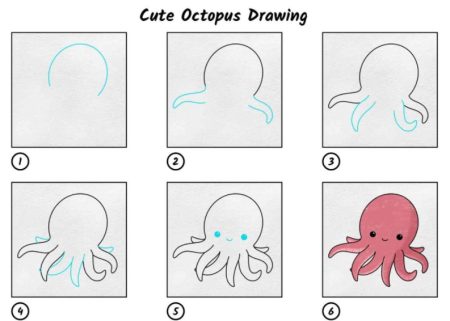 If you really pay attention, some octopuses can be quite cute. You don’t have to do that with this drawing, though.

I like that Hello Artsy put forth the effort in including all the octopus’s arms within the design, unlike other drawings.

Fun Octopus Fact #7: Did you know that the smallest octopus measures a little below 1 inch? If that isn’t the cutest thing ever, then I don’t know what is!

Try other cute and easy animal drawings by checking out our list of easy animals to draw for kids.

If you’re just looking for a drawing that will keep your children busy for 20-30 minutes, then try this one out.

Pencilica takes their time with this design, demonstrated by the careful drawing of each little sucker on the octopus’s arms.

That makes it a perfect video tutorial for kids who need to draw at a slower pace. If you’re still having trouble catching up, simply rewind the video or set the playback to a 0.5x speed.

Fun Octopus Fact #8: These soft creatures have the ability to fit their bodies into tight spaces, which is effective in avoiding predators. 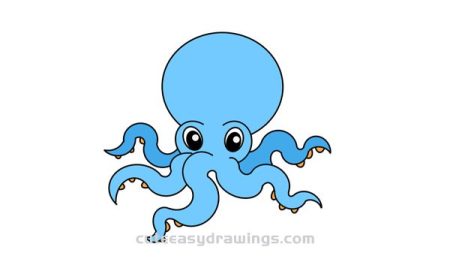 It’s not hard to grasp why children find animals drawn with a cartoon style adorable. That’s true even for octopuses, which some people might find creepy.

Try to recreate this octopus from Cute Easy Drawings.

Fun Octopus Fact #9: An octopus can easily escape its predators by spraying them with blinding black ink!

10. How to Draw a Cute Octopus 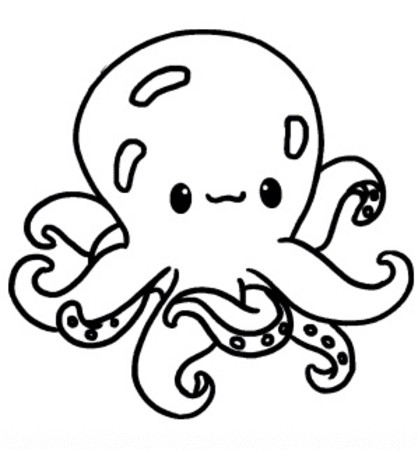 The octopus has a mouth hidden at the centers of its bod, but this design introduces a mouth on its face that makes it much cuter.

Add this design from We Draw Animals to your kids’ drawing collection and you’ll see that they’ll be playing with another imaginary companion in no time.

11. How to Draw an Octopus With Cute Tentacles

This reminds me of Pearl, a similar-looking octopus from Disney’s Finding Nemo. If you’d like to recreate this cute and simple octopus, simply follow the video tutorial on Learn Step By Step’s channel.

Looking for other Disney-inspired crafts? Check out our compilation of Baby Yoda crafts and Bluey crafts!

12. How to Draw a Cartoon Octopus 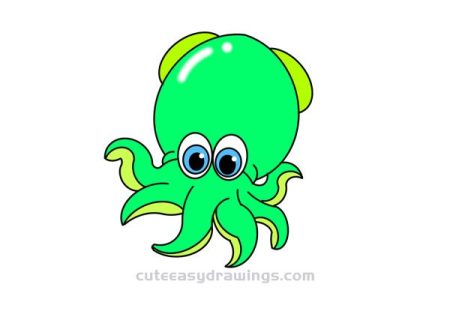 It’s impressive how octopus can change their colors according to their surroundings. Your children can also change their octopuses to whichever color palette they prefer, just how Cute Easy Drawings colored theirs green.

Fun Octopus Fact #12: Octopuses are so good at camouflaging with their environment that you can easily mistake them for a rock or a coral.

Do you find these previous octopus designs too easy? Don’t worry, this list isn’t finished yet. These next octopus drawings will test your artistic skills. 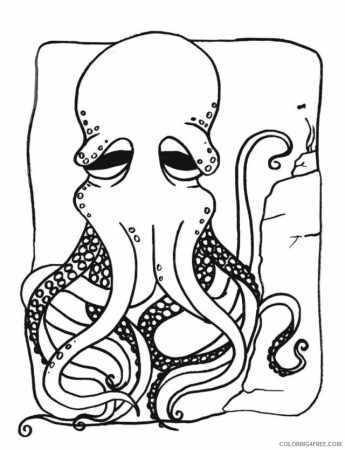 Check out this old but wise octopus from Coloring 4 Free. This isn’t too complex, but you might find some difficulty in the confusing arrangement of the octopus’s arms.

Fun Octopus Fact #13: Octopuses have a brief lifespan of 3-5 years. 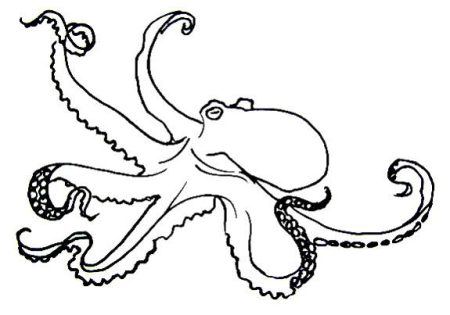 Other than meticulously drawing the squiggly lines on this octopus’s arms, this design from Drawing And Crafts is barely a challenge for novice artists.

Fun Octopus Fact #14: Octopuses are believed to have “nine brains” because the majority of their neurons are found on their tentacles. That would be the equivalent of a human having very smart limbs.

Octopuses are highly intelligent creatures, and this design from Asicno’s channel makes it look like it has a very big brain.

Learn how to draw this octopus by following their video tutorial.

Fun Octopus Fact #15: Octopus have around 500 million neurons around their bodies. That’s an impressive number (especially for an invertebrate) comparable almost to some mammals (like dogs).

16. How to Draw a Realistic Octopus 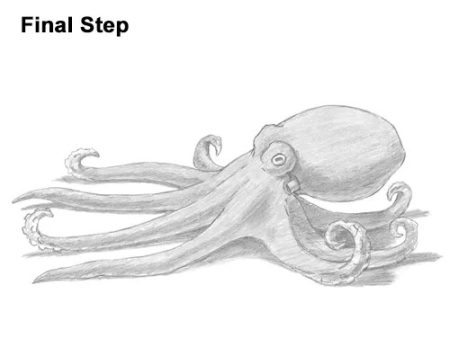 For older kids with more artistic experience who are looking to experiment with complex designs, try this drawing from How 2 Draw Animals.

They’ll be testing their finer hand coordination skills and their knowledge of different shade tones with this drawing.

Fun Octopus Fact #16: Octopuses are masters at escaping, such as getting out from a tightly closed jar, as proven by different experiments performed by scientists. 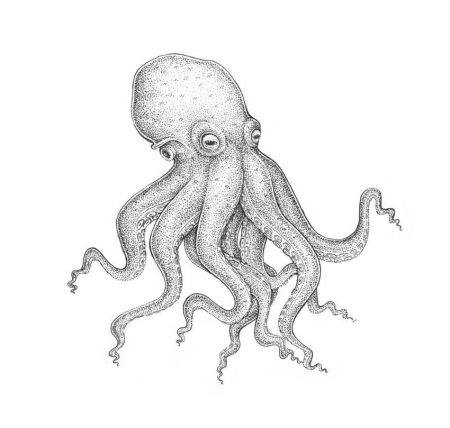 This is the crème de la crème among the octopus designs on this list. It’s an impressive piece of art that isn’t for the faint of heart.

Don’t be intimidated, though, because Envato Tuts+ has plenty of tips and an entire written tutorial with a step-by-step guide.

Fun Fact #17: The oldest octopus fossils can be traced back to 290 million years ago!

Hopefully you’ve learned plenty of interesting facts about the octopus while attempting these octopus drawings.

Which of these did you find the most interesting or easy? Comment below!

For other marine animal crafts, see our ocean crafts and jellyfish crafts lists.