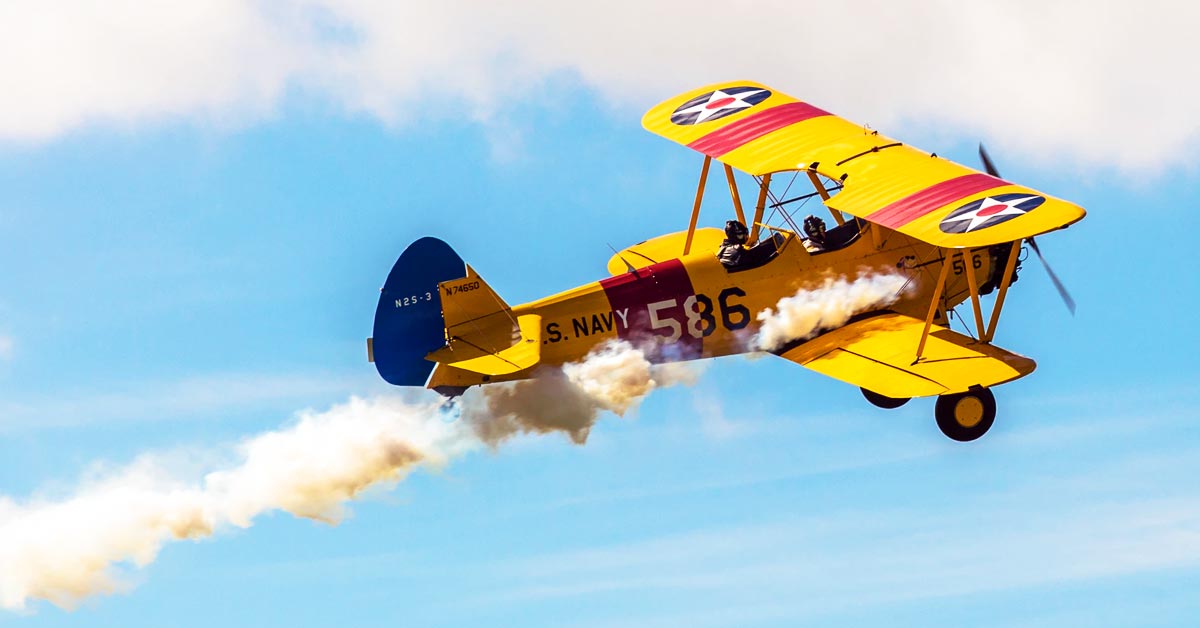 Kids who love flying will enjoy this list of 21 airplane crafts that includes crafts for planes that can fly, ones that can’t, airplane launchers, and even an airplane costume!

There’s just something thrilling about riding a plane. Whether it’s the feeling of being high in the sky or how this big machine defies gravity, riding an airplane is pretty awesome.

8 Soaring Airplane Crafts That Can Fly 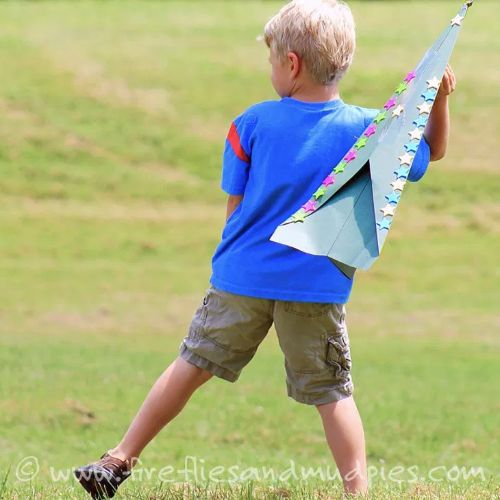 Starting with a big one, Fireflies and Mudpies has this giant airplane craft for kids who want to make a really big paper airplane! All they need is a poster board, stickers, and packing tape to put together this massive airplane craft.

Here’s an easy-to-follow video for preschoolers to make a normal sized, classic paper airplane craft. The Kidsplainer gives clear instructions on how kids can make this simple paper airplane.

Get ready to enhance your folding skills, kids! Foldable Flight’s easy-to-follow video shows kids how to fold a regular piece of paper (8.5” x 11”) to make an airplane craft that can actually fly!

A grown-up’s help might be needed for some of the folds shown in the video.

The Concorde was one of the fastest airplanes during its 27 years of operation as it could travel well over the speed of sound. David shows kids how to easily make a paper replica that flies! Just don’t expect it to break any sound barriers.

For an out of this world paper airplane, user TriKdanG shows kids how to make this flying paper UFO that can boomerang depending on how it’s thrown.

A grown-up might need to help with some of the folds as well as teaching the proper way to throw it.

Here’s a video from a galaxy far, far away that shows kids how to make a flying X-Wing from the Star Wars franchise. All kids need is a piece of paper and a bit of help from a grown-up, and they’re good to go! 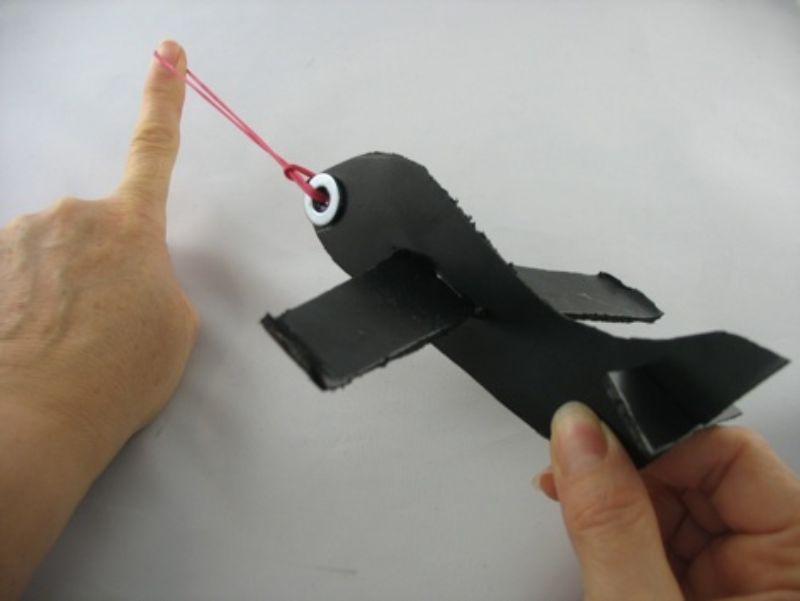 Another way to make an airplane craft fly is by flinging it with a rubber band, just like this one by Amy’s Free Ideas. All kids need is either cardboard or stiff craft foam, a rubber band, cutting tools, washers, and the free plane pattern.

Adult supervision is strongly encouraged for this airplane craft!

These airplane crafts may not fly, but they make for lovely toys and activities to keep kids busy! 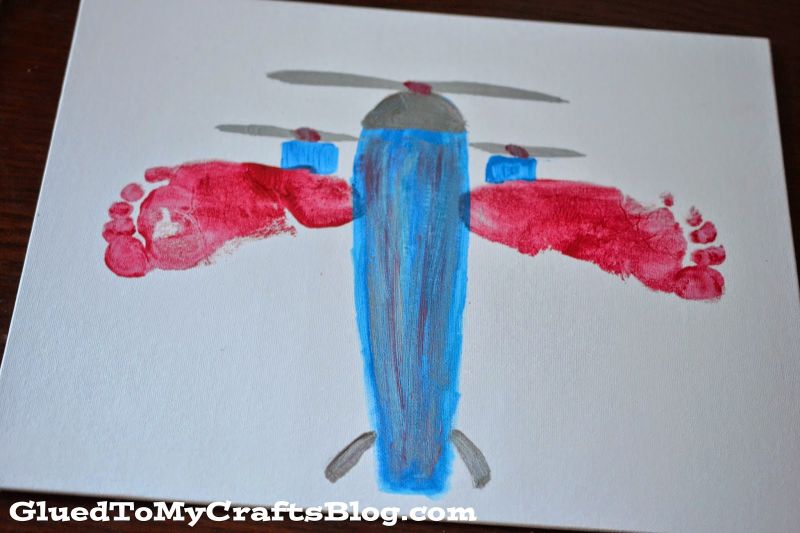 Photo credit: Glued to My Crafts

Glued to My Crafts shows how kiddy footprints can serve as the wings in this airplane painting. Aside from their feet, kids will also need paint, a canvas, a paintbrush, a paper plate, and some baby wipes for cleaning up! 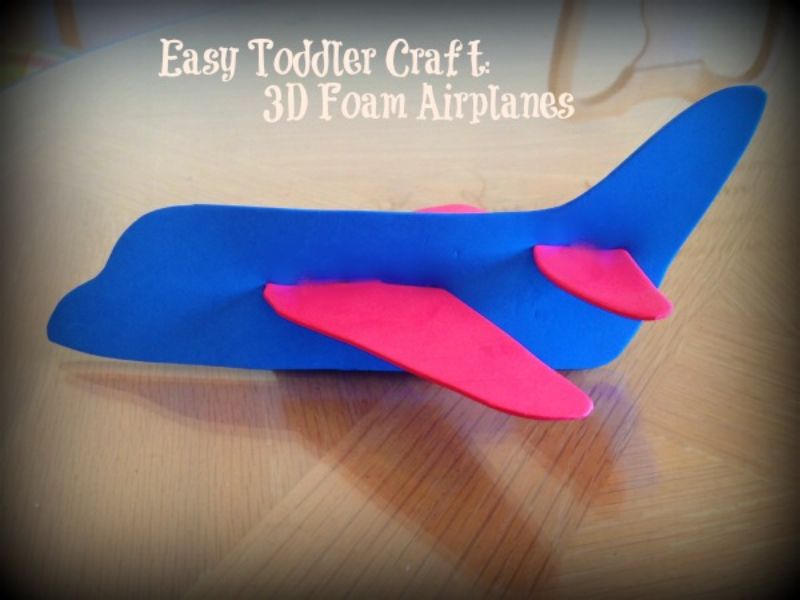 As the picture says, this is a really easy airplane craft for toddlers by Jeanette. All your toddler will need is craft foam and scissors. Easy, right? 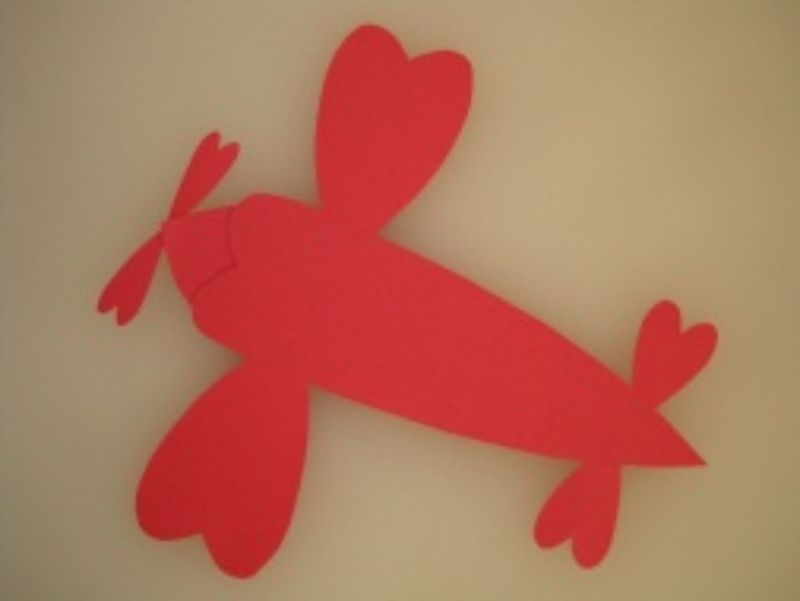 How about an airplane craft that doubles as a Valentine’s day craft? Well, Busy Bee Kids Crafts shows kids how to make this lovely airplane out of hearts with construction paper, scissors, glue, and markers.

What’s great is that a free printable template for the hearts is also provided!

Oddly Satisfying Videos shares a great tutorial kids can follow to turn a plastic bottle into an airplane. In addition to the plastic bottle, kids will also need scissors, glue, paper, and a pencil. That’s it! 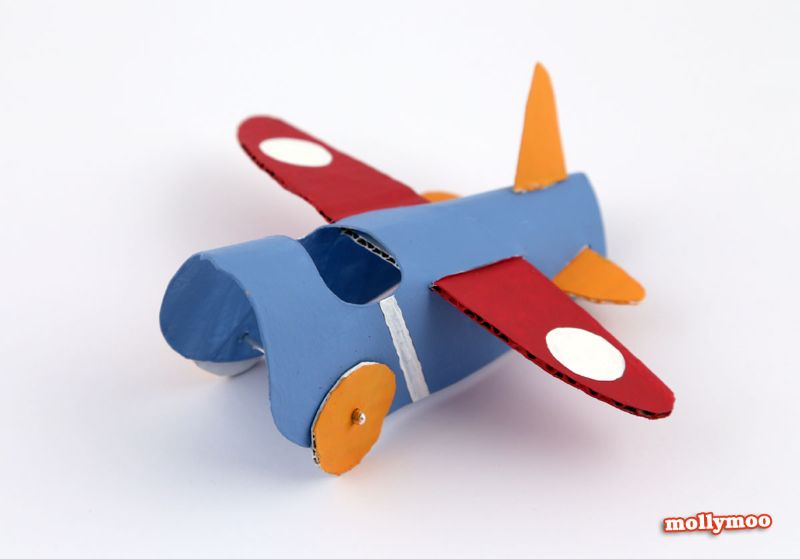 Do you have more empty tissue paper rolls? With a toilet paper roll, cardboard, a piece of wire, paint, glue, pliers, and scissors, Molly Moo Crafts shows kids how to make this simple and colorful airplane. 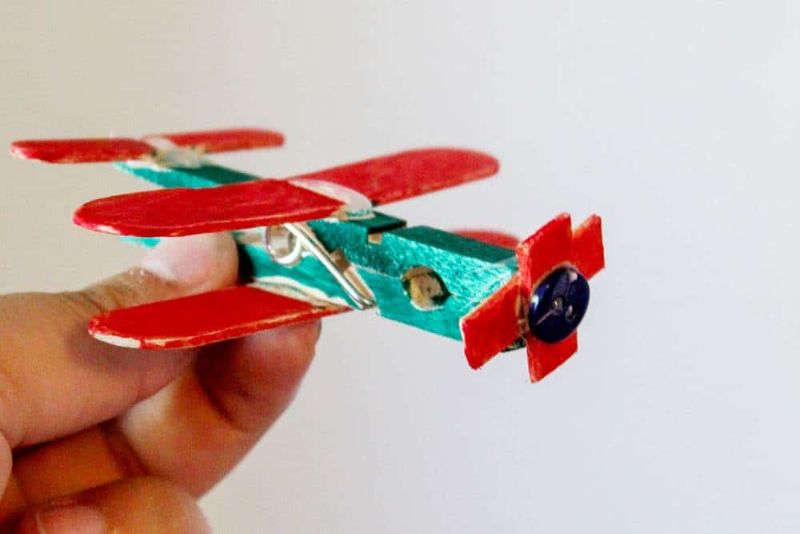 Clothespins aren’t only used to hang clothes. Meraki Mother shows kids how they can use them to make this easy airplane craft. Aside from a clothespin, kids will need normal and jumbo popsicle sticks, a button, a glue gun, and paint or colored markers.

Ratha shows kids how to build an airplane out of popsicle sticks using a glue gun, a black marker, and a wire cutter (to cut the sticks).

Kirigami is a variation of origami that includes cutting and glueing. If they want even more variety in the types of paper planes that can be made, this neat tutorial shows kids how to make a stealth bomber using only paper, scissors, and glue.

Here’s an upcycled airplane craft brought to you by KOOZI FUN TIME! To make this plane, kids will need:

This is quite a lot of materials, but totally worth it to make a lovely airplane out of various recyclable things! 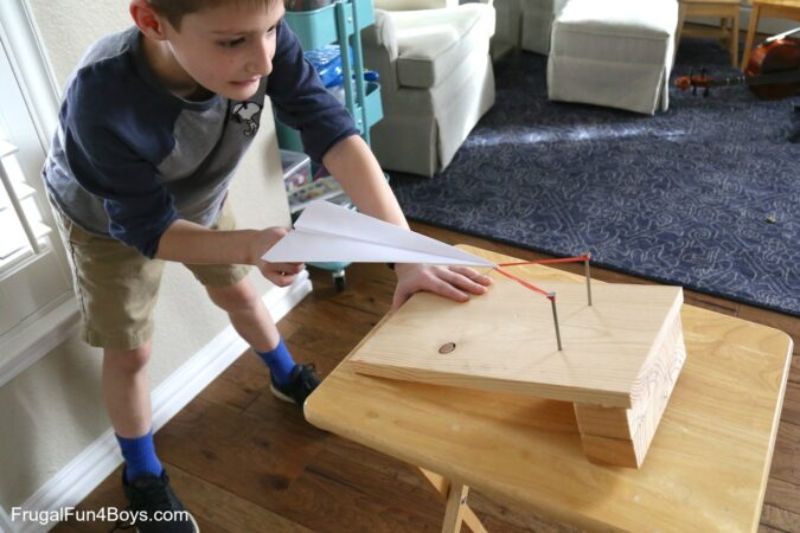 Have some wooden blocks lying around? Then raise your kids’ airplane launching game with this DIY launcher. To make this, kids will need blocks of wood, wood glue, a hammer, a rubber band, and nails.

The use of a hammer and nails should be handled by a grown-up. 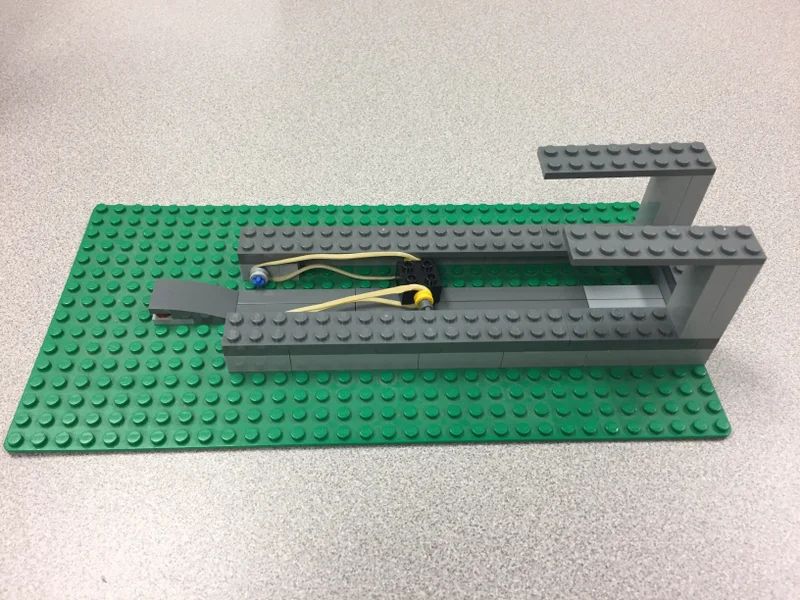 Do you or your kids have a ton of LEGOs lying around? Then this airplane launcher from Instructables is a great activity for kids! Aside from the LEGO bricks, they’ll just need a rubber band and a paper airplane, which Instructables also has instructions for. 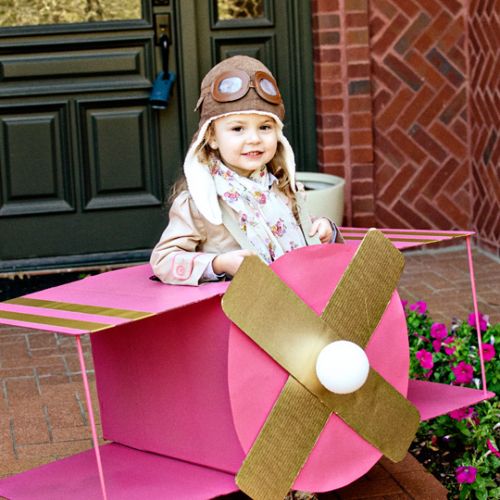 Don’t just fly the plane, become the plane itself! Here’s a neat Halloween costume for kids courtesy of Wills Casa. While a grown-up will be the one doing most of the work, kids can still help with some of the steps.

The materials needed are:

While nothing beats taking an actual airplane ride, kids can still enjoy playing and making these 21 airplane crafts.

Have your kids tried making or flying some of these airplane crafts? Which one did they enjoy the most? Share in the comments below!

If your kids are also into music, then try some of these DIY homemade instruments as well!